Text by Michael Carlton    Photography by Portrait by Alison Shaw

Large granite stones and small fieldstones combine to create a screen between the main house and a guest house.

A nine-foot-high building is a charming folly in an island yard.

Lew French stands in front of a massive fireplace made of thousands of stones, some the size of a Mini Cooper, others no larger than a fingernail. The rocks are all local, and many were harvested on this very farm on Martha's Vineyard. They form a subtle tapestry of color—eggplant, gray, bronze, black and sulfur. Strands of driftwood embedded high on the fireplace  look like arched eyebrows. A small, round, white rock sits in the top center. Asked its significance, French replies, ”Oh, I don't really know. I just liked the way it looked there.”

Each particular rock may not hold profound meaning, but the depth of French's passion for and connection to stone comes through when he talks about his work. “Stone is a powerful presence that still excites me,” he says. “It's compelling stuff and you have to respect it. What can be closer to nature and God? I don't care if it's a boulder or a pebble, there is power, energy and a ground force with stone.”

His intuitive understanding of how stone should be treated, along with his years of practice, has made him one of the most sought-after stone artists in America. His work is in such demand that he has a waiting list of at least a year, and he commands prices that can reach well into six figures. His unique designs show up in fireplaces and fire pits, enclosed courtyards, swimming pools, garden pathways and walls.

French grew up in a small Minnesota town, where he began to work with stone when he was nineteen. “I knew I didn't want to go to college so I started my own business and hired a couple guys to teach me how to do the basics of stonework,” he says.

Like most stonemasons, his mentors usually used mortar to hold stones together, a technique French resists. The majority of his work uses dry stacked stone in which the   tension between the rocks holds them together. “Gravity is the rule,” he says.

He tries to avoid cutting stones because, he says, “The natural state of rock has so much more energy than stone that's been cut. The natural shapes are much more interesting.”

Nearly thirty years ago French, now forty-nine, moved to Martha's Vineyard and began to develop his craft—wall by wall, fireplace by fireplace.

He believes his creations carry on a long tradition of innovation with stone, from such shrines as Stonehenge to the work by the early Romans. “I've never been to Rome but I've seen many pictures of the city and how all the different styles—from the early Romans to today's construction—come together and it all works. That is the lasting legacy of stone. It creates a bond from the past to the present. That's what I'm trying to do.”

He does most of his work on Martha's Vineyard and Cape Cod, but occasionally he accepts commissions outside New England. At the moment he is building an enclosed courtyard in the Chestnut Hill section of Philadelphia. True to his philosophy, he is using local stone—in this case slate—to make a signature statement.

His clients include such luminaries as financial guru Peter Lynch and the architect Robert A.M. Stern, who has selected French for several of his New England projects. “Owning a piece built by Lew French is a dream of many islanders,” says Maggie White, owner of the Vineyard's Hob Knob Inn and a contractor and developer in her own right. “A fireplace made by Lew is like owning a Picasso. He is simply the best.”

French believes his work “should make you feel comfortable and be drawn to the piece. I have a sense of proportion and I like things to make a connective harmony of different matter, especially stone and wood.” He sometimes takes large precut slabs of granite—usually found at abandoned quarries—and includes them in his work. “But the cut stones have to work in harmony with the other materials.”

Late one autumn afternoon, the sun spreads lemon light over the roadside stones. French stops his truck, gets out and looks closely at a house-sized boulder covered in lichens. He touches it lightly, and then shakes his head. “I am truly blessed,” he says quietly.

As are his clients.

EDITOR'S NOTE  Lew French can be reached by e-mail at lew_french_stone@yahoo.com. To see more of his work, pick up a copy of the book Stone by Design: The Artistry of Lew French (Gibbs Smith Publishers, 2005), by French and photographer Alison Shaw. 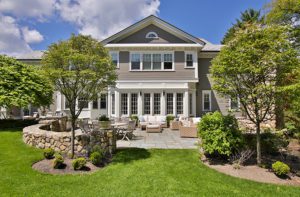